The Grand Palace Tour in Bangkok

Royal Grand Palace, the foremost dazzling sight all told of Kingdom of Thailand and one in every of the goodwonders of Asia is Wat Phra Kaew or the Temple of the Golden Buddha,with the adjoining Grand Palace.These area all interesting places that's a requirement to see for travelling to Krung Thep or Bangkok and therefore the temple and palace grounds area unit full of a unclear range ofother buildings and sacred structures that may all be seen with the Royal Grand Palace and Emerald Buddha Tour.Do not miss out on this tour in Krung Thep that's the highlight of any visit to Krung Thep town.These icons give associate field lexicon of the country and therefore the single most comprehensive introduction to the physical and cultural charms of Kingdom of Thailand.

The Kingdom of Thailand has a history stretching back 800 years, and there have been four capital cities, namely, Krung Sukhothai, Krung Sri Ayutthaya, Krung Thonburi and Krung Ratanakosin (Bangkok). King Rama I moved the capital, now Bangkok, to the east bank of the Chao Phraya River and named the new capital "Ratanakosin Indra Ayothaya."

The Construction of the Grand Palace Bangkok, Thailand

When King Rama I decided to create a new capital, he also began construction of new palace on 6th May 1782, which was at first built entirely of wood and surrounded by a log wall. Construction of the capital and the Grand Palace Bangkok, which occupies an area of approximately 132 rai began in earnest in 1783, as did the construction of the fortifications and gates surrounding the palace. In the Second Reign, the Royal Grand Palace was expanded to the south and more forts were added increasing the total area to 152 rai 2 ngan. The lengths of the walls were 410 meters on the northern side, 510 meters on the eastern side, 360 meters on the southern side and 630 meters on the western side, and remain unchanged until the present day.

The Architecture of the Grand Palace Bangkok is exceedingly beautiful, combining religious and royal significance. a tradition inherited from the former capital of Ayutthaya.

The Construction of the Temple of the Emerald Buddha

The Grand Palace Bangkok was the residence of the kings, queens, princes, princesses, ladies-in-waiting and official from 1783 until 1925. The Temple of the Emerald Buddha (Wat Phra Kaew), is a royal temple situated within the Grand Palace in accordance with ancient tradition.

Itinerary of Grand Palace Bangkok Tour, Thailand
07.30 am: Pick up from the various hotel
08.30 am: Group will be transferred to Wat Phra Keaw, The chapel of The Emerald Buddha, which houses the World's most precious image of the lord Buddha, the 75 cm statue of jade sits atop an 11 m golden pedestal surrounded by Lavish Murala and richy decorated pavilions. Then group will be moved to visit the Grand Palace which encompass several major building. The most prominent building include the Throne hall, the Reception hall and the Coronation hall
12.00 pm: Return to hotel

Remark: (Bangkok Grand Palace Dress Code)
• Restriction: Please do not wear shorts, sandals, no-sleeves T-shirts. Camera may not allow to use inside some buildings.
• Duration of Our Tour: Morning 08.00 am - 12.00 pm / Afternoon 12.00 pm - 16.00 pm
• Things to Know: The Emerald Buddha, a dark green statue, is in a standing form, about 66 centimeters (26 in) tall, carved from a single jade stone (Emerald in Thai means deep green color and not the specific stone). It is carved in the meditating posture in the style of the Lanna school of the northern Thailand.
• Transfer Service: Pick up from Bangkok Central area, area outside will subject to an extra charge. Please inform your pick up information while you doing the booking process. We will inform your pick up by email. 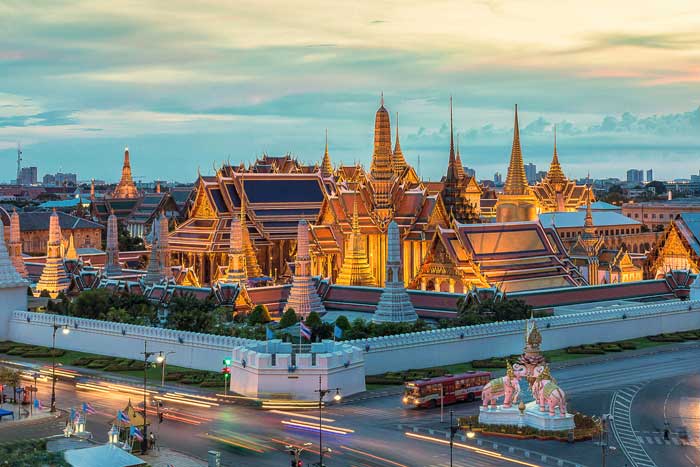 The Grand Palace Bangkok is divided into different areas as followed:

The Outer Zone, situated at the front of the Grand Palace on the northern side, is where various government offices are situated, including those for military officials, civil officials, the harbor department and the royal treasury.

The Middle Zone, situated at the center of the Grand Palace, where the Phra Mahaprasart and Phra Ratchamonthien are located, was until 1925 the residence of the king, the queen, the princes, the princesses, the royal concubines, ladies-in-waiting and female officials.

The Inner Zone, at the rear of the Grand Palace includes the building where members of the royal family and royal attendants, as well as princes under 13 years of age used to reside.

Sanam Chai is as small lawn within the walls of the Grand Palace situated on the eastern side in front of Sala Sahathai Samakhom and near the walls of the Emerald Buddha Temple (Wat Phra Kaew) located to the north.

Sanam Luang (Phra Meru ground), located outside the walls of the Grand Palace and its front, was copied from Ayutthaya and is used for various royal ceremonies. 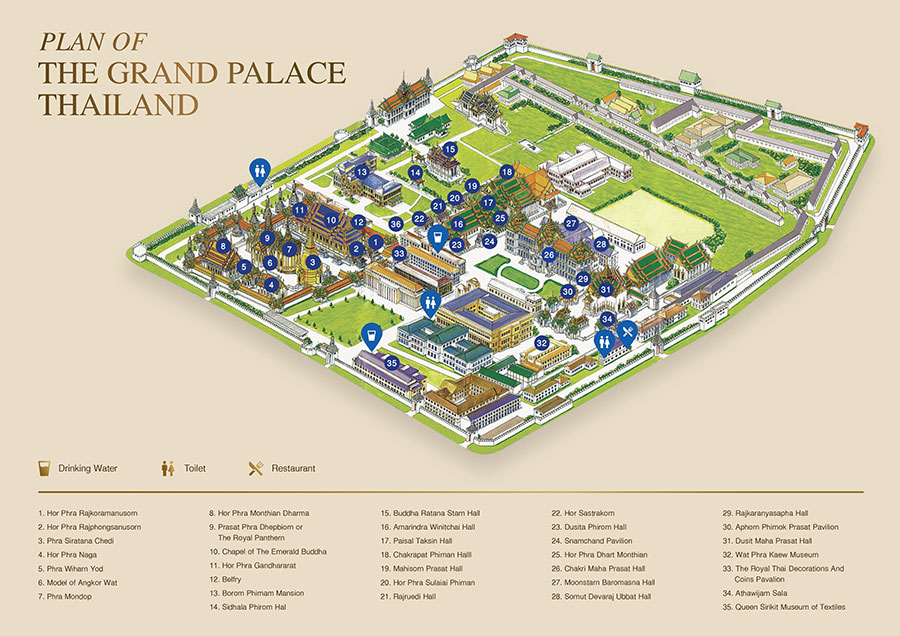 ThaiTourismGuide can offer travel services such as Bangkok sightseeing, van rental with driver, tour guides for tourists in Thailand. We can arrange your trip for The Grand Palace Bangkok for both join tour and private tour.  Please feel free to contact us to help you plan your trip by informing your e-mail address to get the best deal:•    Your other destination in Thailand (Bangkok, Chiang Mai, Phuket, Pattaya) •    Budget of this trip•    Number of people in your group•    How many day in Thailand (Arrival date, Departure date)•    Your hotel (If you want to reserve hotel with us, please inform your budget or specific the hotel)•    Is there child/ senior in your group?•    Please inform where to go or what you want to do in this trip. If you don’t have idea at this time, please check our Bangkok sightseeing or Day Trip in Bangkok with our link as followed: https://www.thaitourismguide.com/day-trips/day-trip-in-bangkok.html. We also have many activities or attractions in Thailand for other destination such as Pattaya, Phuket, Chaing Mai, Kanchanaburi, Krabi or Hua Hin. If you need any specific information about travelling in Thailand, please feel free to contact us.

Be the first to review this product

Use spaces to separate tags. Use single quotes (') for phrases.

You may also be interested in the following product(s)